ContractWorks is thrilled to announce its expansion into Europe with the opening of our new office in London, England.

This marks the second office location for ContractWorks, in addition to our headquarters in Santa Barbara, California. ContractWorks and its parent company SecureDocs, Inc. already work with businesses around the world, and opening a location in Europe will create an even greater opportunity to serve the needs of current and future customers.

Additionally, ContractWorks customers can now choose to host their data either in the EU or in the United States, helping companies comply with GDPR requirements. 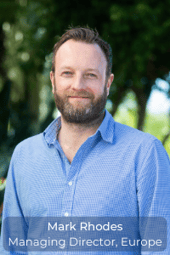 Mark Rhodes has been hired to lead the efforts for the London office, and will serve as Managing Director, Europe. Rhodes joined SecureDocs, Inc. this January after spending the last 20 years working in the recruitment technology space in the UK.

Most recently, he was Group Marketing Director for REED, the largest family-owned recruitment company in the world. As a board member for eight years, Rhodes led consumer and B2B marketing for reed.co.uk during a period of rapid growth. His tenure at REED also included an interim period as Managing Director of reed.co.uk, as well as leadership positions in Marketing, Product, and eCommerce.

“This is an exciting day and a monumental milestone for ContractWorks and SecureDocs, Inc. We have a strong foundation of existing European-based customers, and opening a London office further improves our ability to serve the needs of European businesses, and demonstrates our commitment to the region. Mark Rhodes adds a great deal of marketing and sales experience to the team and is a proven leader. We’re thrilled to have him on board leading the way for our London office.”

The new London office will be home to a team of ContractWorks experts dedicated exclusively to working with businesses from Europe, the Middle East, and Africa, which will further improve ContractWorks’ highly rated sales and support experience.

See how ContractWorks can help you quickly take control of your contracts.