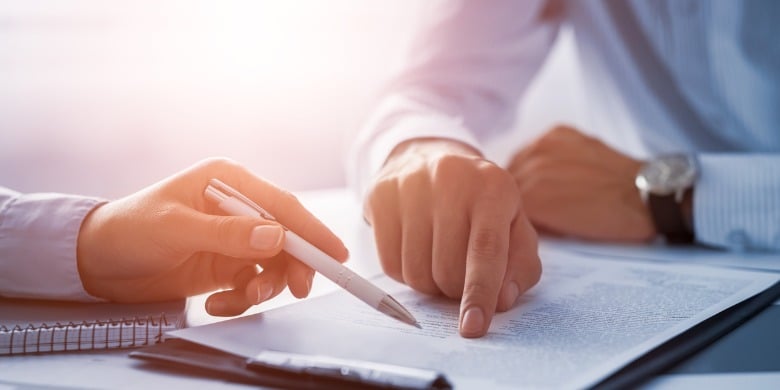 Click below to watch a short video of the blog highlights, or continue scrolling to read the rest of the article.

What is a Commercial Contract?

In the simplest terms, a commercial contract is a legally binding agreement between two or more parties. Most of the time, commercial contracts come in the form of written documents, but they can also be verbal agreements in certain situations. Commercial contracts explain, in detail, what all parties are obligated to do in order for the contract to remain valid, and what the repercussions are should any party fail to comply with the agreed upon terms and conditions.

When two or more firms enter into a contract, there will no doubt be a significant exchange of information in order for both sides to perform their contractually stipulated obligations. In light of the need to furnish certain information about each side’s financial and business practices, it is imperative for the contract to contain a strongly worded confidentiality clause. This clause should preclude both sides from divulging any and all information that is shared during the course of the transaction. Of course, this is particularly important when there is valuable intellectual property at stake.

The phrase force majeure literally translates as a “greater force.” This clause should always be included in commercial contracts, as it can protect parties from circumstances that arise that are beyond anyone’s control. For example, in the event of a natural catastrophe, such as an earthquake or hurricane, a shipment schedule may be unavoidably disrupted. In general, the definition of force majeure is rather broad, with many contracts including wording about things like terrorist attacks and even acts of God. This clause is important to include to ensure that any failure to perform due to such an unforeseeable disruption is not considered a breach of contract.

In business, things often do not occur as planned, and thus parties must be able to cut and run as necessary. For contracts, this usually involves the inclusion of a termination clause. This section of the contract must clearly lay out the circumstances under which one or both parties may terminate the contract, irrespective of the time left under the agreement. For example, if one of the parties is acquired by another entity, the other party to the contract may reserve the right to terminate the agreement.

These days, cross-border transactions are fairly routine, both in the domestic and international sense. When the parties to a contract are located in more than one state, or perhaps more than one country, it may not be clear which state’s laws govern the arrangement. Therefore, commercial contracts should always specify the state that will have jurisdiction over the agreement, so that it is perfectly clear which laws are applicable.

Even the most well-drafted contracts are susceptible to conflict. As a result, it is of the utmost importance to clarify the parties’ plans for dispute resolution in the event that an issue arises. In many contracts, it is now common practice for firms to include an arbitration clause, requiring the parties to submit to arbitration prior to or in lieu of seeking a remedy via litigation. This is generally a faster, cheaper way to solve contract-related problems, although some contracts still allow for traditional legal recourse.

In light of the frequency of contract breaches and in an effort to deter them, it is also standard practice for commercial contracts to contain clauses related to damages. In general, liquidated damages clauses will be included, which is usually a predetermined amount that will be owed if one side fails to perform. Of course, a court may award other types of damages beyond that amount depending on the nature and impact of the breach.

Commercial contracts lay the foundation for how your business operates, so it’s important that you develop a structured plan to manage your agreements throughout the contract lifecycle. There are various stages that make up the contract management process, ranging from planning and contract implementation through contract closeout.

Here’s a brief overview of the seven stages of contract management so you can determine what steps you need to take to succeed in each part of the process:

As the name suggests, this is the time to plan out your process for managing each agreement, determine roles and responsibilities, and assign resources to ensure the contract is monitored closely and obligations are met.

The implementation stage is the process of putting your plan into action, and ensuring you have all the right tools in place to manage agreements, including contract management software.

During the pre-contract stage, new agreements are carefully drafted, reviewed, and signed. Be sure each contract includes all of the required terms and conditions (including the clauses covered above), so all parties feel confident that the agreement clearly states what is expected of them.

Since the individuals who drafted and negotiated the contract aren’t necessarily the ones who will monitor the active agreement, this is the time to make sure that the contract manager is up to speed and understands all milestones, obligations, and other contract details.

The contract stage is the period of time when the agreement is active and the parties involved are working to deliver services according to the agreed upon terms.

Before decisions are made about the future of a contract - whether it should be terminated, negotiated, or renewed - the agreement should be evaluated to determine the impact it has on the business. The pre-renewal stage is when this evaluation happens, so stakeholders have the information needed to decide next steps.

The post-contract stage, or contract closeout, is the time to wrap up all items related to the agreement and conduct a post-mortem, so you can improve the way future commercial contracts are managed.

Regardless of the size of your business or the industry it operates in, it’s imperative that your commercial contracts are carefully drafted and reviewed thoroughly, both before signing and on a regular basis. For help getting started building out your process for managing commercial agreements, download The Master Checklist for Contract Review & Management.

Tips and best practices for a successful contract management process.

The Difference Between Contract Management and Contract Administration
Read article

Looking for a better way to manage your commercial contracts?

See how you can simplify the process with ContractWorks.